DHA is a key structural component of the brain and retina in the eyes. Toddlers and young children may not be consuming the recommended amount of DHA due to lack of DHA-rich food like fatty fish and seafood. But more often than not, it is because of picky eating. 1. Compare the amount of DHA & EPAMost organizations recommend at least 250mg (DHA + EPA) daily for children. A higher daily supplementation of more than 450 mg (DHA + EPA) helps improve cognitive functioning in children and adolescents and also increases the omega-3 index in the body to more than 6%*. *(Nutrients. 12(10): 3115 (2020)

However, it is very likely that children are not getting sufficient DHA and EPA from their daily diets.

When choosing a DHA supplement, look at the total mg of DHA + EPA, not total mg of fish oil. 2. Look at the DHA:EPA ratioDHA and EPA serve different functions in the body. DHA is critical for healthy brain, eye and behavioural development, while EPA is known to support healthy inflammatory response.

High-DHA-low-EPA is the most effective ratio to cross the blood-brain barrier for best absorption and efficacy, and for optimal brain and cognitive functions. Most children DHA supplements typically offer less than 30% DHA. I ♥ My Kids Brain and Bones Burstlets offer 76% DHA and 5% EPA. 3. Check the form of Omega-3Omega-3 fatty acids in fish oil are available in 3 forms: non-concentrated natural triglycerides (TG), concentrated ethyl esters (EE) and concentrated re-esterified triglycerides (rTG). rTG is the most superior form that allows superior absorption into the body and maximal potency.

4. Purity & FreshnessFor a good measure of the quality and freshness, it is important to ensure the fish oil abides by international standards set by third party omega-3 trade bodies such as GOED.

I ♥ My Kids Brain & Bones Burstlet far exceeds the limit set by GOED.

Invest in your child’s brain, eye and bone health early to reap the long-term benefits. The growing years is a critical time for children to obtain sufficient nutrients to support the rapid brain, eye, and bone development. Vitamin D3 helps the body absorb calcium and vitamin K2 helps “direct” the calcium to the bones. Besides beneficial to the bones, vitamin K2 protects against calcium from accumulating in soft tissues, such as blood vessels and kidneys. On top of how nutrient-rich each chewable burstlet is, I ♥ My Kids Brain & Bones Burstlets is more than just an everyday vitamin for your mini-me, it’s a daily treat!

I ♥ My Kids Brain & Bones Burstlets offers a functional dosage of DHA, vitamin D3 and vitamin K2 in every burstlet. Just 1 burstlet a day not only fills the DHA gap, but also supports healthy bone growth during their growing years. Safe for long-term consumption, it is highly recommended for toddlers and even adolescents.

Omega-3 fatty acids are essential for healthy growth and development of children. These essential fats are associated with a wide range of health benefits.

Some experience impulsive behaviours with difficulty in concentrating. This is common in childhood and progress into adulthood. DHA as the main omega-3 fatty acid in the brain helps to increase the blood flow for mental tasks. It was noticed in researches that children and adults with attention problems have lower blood levels of omega-3. Scientists predict that the relative deficiencies DHA may underlie some of the behavioural and learning problems associated with attention problems.

Study 1:
In this clinical trial, a total of 362 healthy children of age 7 to 9 years with initial underperforming in reading were randomly administered either 600mg/day DHA or placebo. ITT (intention-to-treat) analyses showed significant improvement in a subgroup of 224 children whose initial reading performance was ≤20(th) centiles. Parent-rated behaviour problems (attention-problem type symptoms) were significantly reduced by DHA supplementation. These findings suggest that DHA supplementation could be a safe and effective approach to improve reading and behaviour in healthy but underperforming children. Some experience impulsive behaviours with difficulty in concentrating which is usually common in childhood and progress into adulthood. DHA is the main omega-3 fatty acid in the brain that helps to increase the blood flow for mental tasks. It was noticed in researches that children and adults with attention problems have lower blood levels of omega-3. Scientists predict that the relative deficiencies DHA may underlie some of the behavioural and learning problems associated with attention problems.

Study:
In this clinical trial, healthy 4-year-old children were administered 400 mg/day DHA or placebo for 4 months and the relationship of DHA levels in whole capillary blood with scores on cognitive tests was evaluated. Result showed that there is a statistically significant (p = 0.018) positive association between blood level of DHA and higher scores on the Peabody Picture Vocabulary Test, which is a test of listening comprehension and vocabulary acquisition. The findings suggest that DHA supplementation potentially helps improve the learning ability of children. 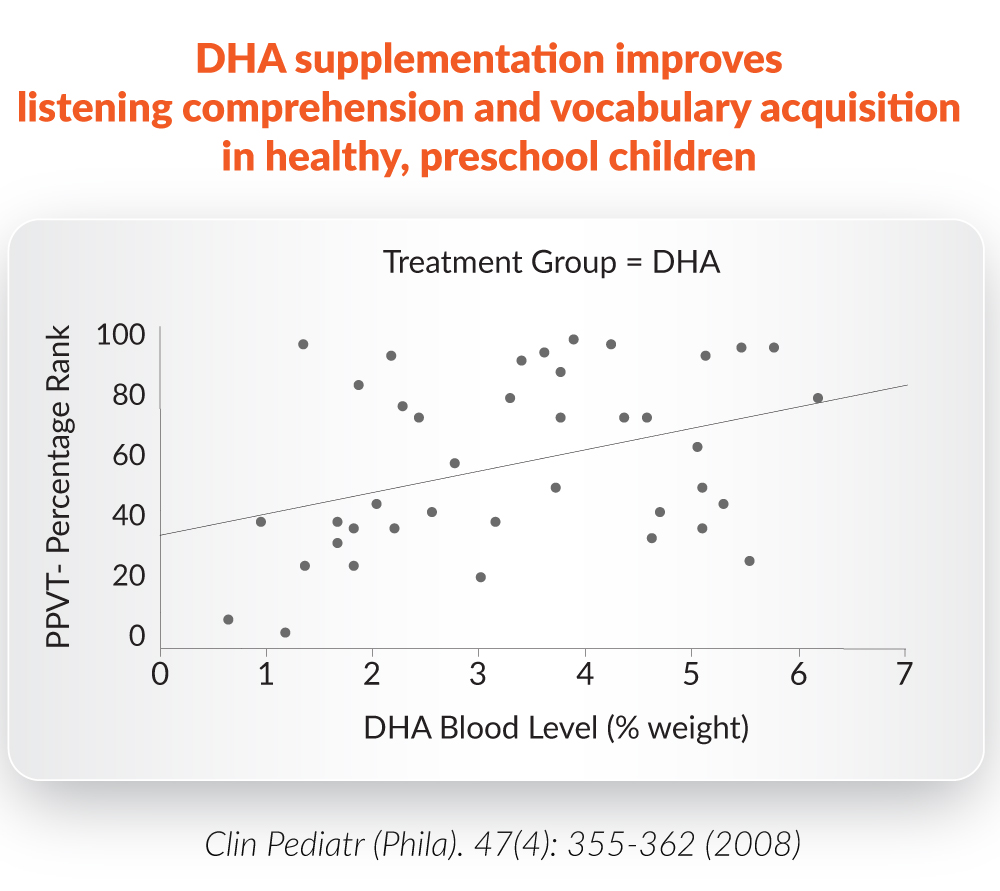 Developmental coordination disorder (DCD), a lifelong condition that makes it hard to learn motor skills and coordination, aects around 5% of school-aged children. This disorder is commonly associated with diculties in learning, behavioural and psychosocial adjustment that continue into adulthood.

DHA, a beneficial omega-3 fatty acid commonly found in fish oil, may have long-term neurodevelopmental effects which would help reduce aggressive and antisocial behavioural problems in children. Studies have shown that children with neurodevelopmental disorders, such as attention problems and autism may have low levels of DHA that contribute to their symptoms. Hence, increasing DHA may help improve symptoms of these disorders, including learning impairments, inattention, hyperactivity, aggression, and other behaviour problems.

Study 1:
In this clinical trial, 166 schoolchildren with 9 to 12 years of age were either given fish oil-fortified food (bread, sausage and spaghetti) which provides 3600 mg of DHA + 840 mg of EPA/week (fish oil group) or placebo for 3 months. The effects of fish oil supplementation on schoolchildren’s behaviour were evaluated, with changes in aggression over time as the primary endpoint. At the start and end of the study, physical aggression was assessed using Hostility-Aggression Questionnaire for Children. Results showed that physical aggression in girls increased significantly in the placebo group and did not change in the fish oil group, with statistically signifcant between groups (p =0.008). In addition, the impulsivity of girls assessed by parents or guardians was significantly reduced in the fish oil group (p= 0.008) compared to placebo group. These findings suggest the potential of omega-3 supplementation on improving physical aggression in schoolchildren. Study 2:
In this clinical trial, normal school children (mostly aged 9 to 12 years old) were administered either 6 fish oil capsules per day which provided 0.65g DHA and 0.10g eicosapentaenoic acid (EPA)/day (DHA group) or soybean-oil capsules (control group) for 3 months. At the start and end of the study, blood samples were taken to evaluate the concentration of DHA and EPA and attendance was recorded during the study period. Results showed that the concentrations of DHA and EPA in the phospholipid fraction in red blood cells were significantly increased in the DHA group. In addition, the inability to attend school regularly during the study period improved signifcantly in the DHA group (p = 0.002), compared to the control group. The odds ratios of inability to attend school perfectly during the study period in the DHA group were significantly reduced to 0.30 in boys and was non-significantly to 0.56 in girls, compared with the control group. This finding suggests that DHA-rich fish oil may help improve the school attendance rate in schoolchildren. DHA is crucial for children’s eye development and function. It is an essential nutrient in the retina for visual acuity. Several studies have shown the beneficial effect of dietary DHA on visual acuity in infants.

Study:
In this clinical trial, Danish lactating mothers with habitual fish intake below the 50th percentile of the Danish National Birth Cohort were administered fish oil (1.3g/day long-chain omega-3 fatty acid) or olive oil. The oral administration started within a week after delivery and lasted for 4 months. Results showed that fish oil supplementation in lactating mothers gave rise to a 3-fold increase in the DHA content of the 4-month milk samples. DHA in infant red blood cells was significantly increased by almost 50% (p < 0.001). In addition, infant visual acuity was positively associated at 4 months with infant DHA in red blood cells (p = 0.004). These findings suggest that infants with higher omega-3 fatty acids in red blood cells had a better visual acuity at 4-month of age, suggesting the beneficial effects of omega-3 fatty acid on visual maturation. 
WARNING: This product is not recommended for children under 4 years of age due to risk of choking. Product should be fully chewed under adult supervision.

Give chewable burstlet to the child or cut the burstlet and squeeze the contents into a beverage.

KEEP OUT OF REACH OF CHILDREN.

This product is not recommended for children under 4 years of age due to risk of choking. The burstlet should be fully chewed under adult supervision.

Do not consume any more than 2 chewable burstlets a day.